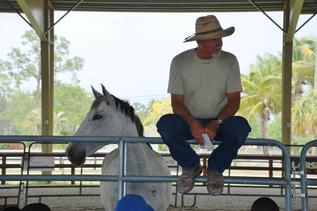 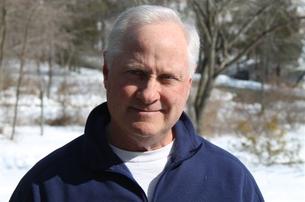 The Father of Horse Sense

Horse Sense for Leaders : How it Began

During the mid 1990’s, John Lord, who at the time served as Director of Organizational Development and Training for the University of Virginia had the idea that man’s relationship with the horse, and it’s many parallels to human relationships might serve as an excellent model for learning, not only for improving interpersonal relationships, but most particularly surrounding the skills needed for effective leadership skills.

John had married an avid equestrian, and later acquired his own horse with which to enjoy the sport with his wife and friends. It was at this point, that John began to realize very quickly the importance of successful leadership skills when dealing with such a large powerful creature. After several problematic occasions, and much advise from friends, some helpful and some not so helpful, he began to search for someone who could help him to, in his words, “gain more control over his horse!”

His search began somewhat locally, and quickly evolved to searching the internet, where he discovered that there were many different approaches to his quest, but the one that most attracted him, particularly because of his background in leadership development, were a number of people who strived to form and build a relationship with the horse rather than try to gain control over it. After studying these ideas, attending some clinics and demonstrations, and getting better results with his horse, he was set on a path, and more than ever convinced that this would indeed be an excellent model to exhibit effective leadership skills in the human relationship.

At this point John began to research numerous trainers and horse practitioners, some who portrayed themselves as “Horse Whisperers”, some claiming to be masters at leadership, others with very elaborate presentations with follow up sales and book signings, and some who were just really talented horseman striving to help others with their horses. From this information, he selected a group of the ones who in his words “got it”, and began to contact them about his idea, travel to see them work or at demonstrations, and privately met with several about his idea, but always left without feeling that this was indeed the person with whom he could successfully  partner with, until he finally gave up on the idea entirely. When asked by his friends and associates why he had not been able to find someone, he replied that he had not yet been able to find an “articulate cowboy!”

A couple of years later he began having some behavioral issues with his horse Cody, and had been unable to resolve them, when a neighbor suggested that he call Louis Wood, who lived about 30 minutes away from his home in Virginia, with whom they had had great success. After chatting with him on the phone, John and his wife took his horse to Louis for an evaluation, and after the first half hour of watching Louis work with his horse he began excitedly exclaiming to his wife that he was the one…..this was the person that he had looked for so many years to partner with for the program!

Almost immediately John approached Louis with his idea, and willingness to partner with him on this new endeavor. Louis who had long been on the path of relationship building with his horses and their riders, and used many parallels to human relationships to help them understand their horses needs to be effective leaders, saw potential in John’s idea, but had some apprehensions as to what he need to offer concerning content. After much discussion, they both agreed that the best course of action would be to “let Louis be Louis” and let him craft the learnings from the group from what the horse presented with John so eloquently helping them to think about how to apply their learnings in the workplace.

John offered several programs initially, some loaded with cynics, non - horse owners, and varying levels of leadership ability to test this new idea, and see if it truly offered what he felt it could be. It was met with overwhelmingly positive results from almost  everyone attending and he began to market the program.

During the Last 5 years of his tenure, while serving as Director of the University of Virginia Leadership Development Center, he offered Horse Sense for Leaders both internally within the University, and through the college as a resource for other organizations wishing to improve their leadership skills, all with excellent results. Upon his retirement from the University in 2004, he formed a private consulting practice and continued to partner with Louis to offer Horse Sense.

Since the time of its conception, 19 years ago, John and Louis have offered hundreds  of programs  throughout the United States. Their clients have included a large number of Colleges and Universities, Private and Public Corporations, numerous local, state and federal agencies, law enforcement, fire and rescue departments, as well as presenting for national conferences  such as the National Fire Academy, and The National Association of Realtors.  Their program has been featured in publications as far ranging as Newsweek, Training and Development Journal, The Washington Post, Ladies Home Journal and many other business publications.

At the end of 2016 John Lord retired from his practice , and with his support and blessings,  the original program will continue on with Louis Wood continuing his role, and a team of co- facilitators carefully selected by the two of them to continue to offer the quality and integrity of the program they began so long ago.

John will be truly missed as part of the program, but the thousands of people who have been touched by his vision and foresight will always be a living testament to his work!