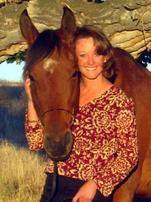 During the course of offering "Horse Sense for Leaders", Louis began doing a series of these clinics for a client in Denver, Colorado, and over a 10 year period completed over 100 programs in that area.  Karen Fagan, a local therapist, was one of the participants who's equine relationship was used as a model in one of the clinic's.  Finding value in his work, she began to study his horsemanship methods, later attending and sponsoring his horsemanship clinics, and ultimately becoming the person who acquired other participants to be utilized in his Horse Sense for Leaders leadership clinic.  Acting in this capacity, Karen had the opportunity to observe his work numerous times, and was continually struck by Louis' emphasis on self awareness, and development as a person in order to be more effective in interpersonal relationships, and how that related to better leadership skills.

Karen, an avid horse person, has often used her own equine experiences, as a parallel to help her clients understand different ways of dealing with personal relationships.  She began to feel that many of the things presented in Louis' program could serve as a powerful model which could very effectively open up healthy discussions on how humans react and relate to others, particularly during times of stress or anxiety.  With these thoughts in mind, Karen approached Louis with her ideas, and after numerous discussions they decided to collaborate and create this program.

In 2011, the initial programs were offered to groups of private individuals, often referred by counselors, and focused primarily with issues surrounding fear and anxiety.  Reviews and feedback from these programs was excellent, and later a somewhat modified model was offered and certified as Continuing Education Course credit hours for counselors in the Denver area, which also received outstanding reviews from the participants.  Initially, all programs were offered in the Denver area, but beginning in 2014, are now set for offering in the Wellington Florida area.

Today this program,  "Building Trusting Relationships", is available and offered to any group either private or public, wherever they are located, and may be custom tailored to fit the specific needs of the client.  If you have an interest in booking a program, or would like more information, please contact Louis or Karen on how we may best be able to serve your needs.

Karen Anderson Fagan was born and raised in San Antonio Texas.  After completing her

degree in Psychology at Southwestern University, she headed north to Denver, Colorado where she

earned a Master of Arts in Counseling at the University of Denver.

Karen's career has afforded her the opportunity to work in many different settings.  In Texas

contracted residential treatment center.  After moving to Denver, she worked as a counselor

in an adoption agency, and was later offered a position at a State-Funded County Mental

correctional facilities and residential treatment centers.  After 5 years in Community

Mental Health, Karen took a position in the corporate world as a clinician in a large private

A lifelong love of horses led Karen into the sport of Endurance Riding.  She and her Arabian horses have been

competing  in the sport for 15 years, and she is now excited to be sharing her passion for riding with her daughters.

Karen currently owns and operates her own thriving psychotherapy practice.  Specializing in

the treatment of anxiety and trauma, she often incorporates elements of her own horsemanship experiences

during work with clients, creating a framework for them to move beyond the grip of the fear-based response

into a more empowered and confident future.